Today we’re talking about fire safety in tiny homes – why it’s important, why tiny homes on wheels are prone to fires, and the precautions you can take to ensure your journey isn’t cut short by a fire disaster.

Fire safety is one of those things most people don’t think about until after they’ve had a scare of some kind. It’s one of those out-of-sight, out-of-mind things. The best case scenario is something small that prompts us to evaluate what could have happened and take steps to ensure a similar worse situation doesn’t occur.

This last year we’ve seen the worst-case scenario in the tiny home community. In 2020, over a dozen buses, RVs, and vans (that we know about) were lost to fires. Most resulted in a complete loss of the home. A few resulted in the death of beloved family pets, severe burn injuries, and very close calls in the family getting out in time. 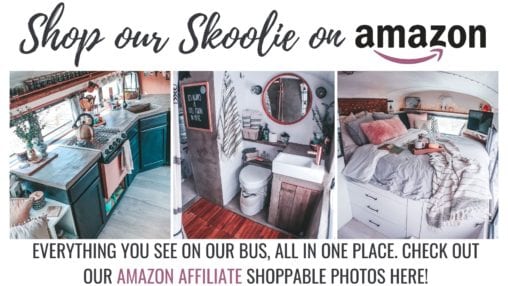 So why are tiny homes on wheels prone to fires, and why is fire safety in tiny homes is important? What are the most common causes of fire in them? And how can you prevent them from happening?

CAUSES OF FIRES IN TINY HOMES

Fires start in tiny homes for the same reasons they start in traditional homes. But tiny homes have additional factors to consider that stick-built homes don’t. Today, we’ll be covering these tiny home-specific issues. Understand this isn’t a comprehensive list, and every build is unique and different. Use it as a jumping-off point to assess your own home and find the solutions that will work for you.

Wood stoves and gas-fired heating units like water heaters generally have recommended clearances. In traditional homes, builders plan spaces accordingly so that nothing is near the appliance while it’s operating, reducing fire hazards. In a tiny home, however, you may literally be short on space.

Our wood stove, for instance, has a recommended clearance of 18″ from surrounding walls for safe operation. Trying to fit it into our build with those clearances would have meant keeping it smack in the middle of the bus. We were able to reduce the necessary clearance by installing a surround of concrete board, covered in concrete, and protected by a metal heat shield on spacers that creates an air barrier between the wall and metal. Even when we’re running the stove at full blast, the wall behind the metal (made of concrete) stays cool. We encountered a similar problem with the water heater and had to come up with a creative venting solution.

Considering these reduced clearances and taking steps while building to ensure safety is the best fire prevention step you can take. Don’t just assume all will be well – take steps to build in fire protection while you’re in the initial build, and you won’t have to worry as much about it later.

It goes without saying that flammable gases should be treated with respect, and many RVs, vans, and skoolies depend on them for their cooking and heating appliances. Make sure to do your research while building to ensure your gas-fired systems are properly installed, vented, and sectioned off.

When I was in my teens, I watched my aunt’s trailer house burn to the ground in minutes as a result of a BBQ propane tank that exploded. It was a BBQ they’d had and used regularly for years with no issues. Make it a habit to frequently inspect your tanks and lines to look for loose fittings and leaks. This is another case where prevention is worth a pound of cure.

Electrical systems in homes cause 51,000 fires each year, mostly due to faulty or old wiring and circuit overload. Tiny homes that move have an additional concern – your home is basically in an earthquake zone! Every time you move your rig, you’re subjecting all the parts within it to movement and friction. While you can plan and build accordingly, there are things you can’t always prepare for or foresee. Movement can cause wires to jiggle loose or rub repeatedly against nearby objects, wearing through the protective coatings.

Further, solar energy comes with an array of components – panels, wires, inverters, charge controllers, and more. Malfunctions and overloads happen. We personally had an issue with one of our wires that could have easily led to a fire. While appropriately gauged, for some reason it began to melt. We caught it in time and traded it out for heavier-duty wire, but it goes to show that even with a properly built system, sometimes things go wrong.

A HOME WITH AN ENGINE

This is definitely a problem that stick-built homeowners don’t have to worry about. Tiny homes on wheels are built over a gas tank and an engine, meaning they also have to worry about a fire originating in their engine compartment. A car fire, essentially. As a matter of fact, one of the fires we saw this last year included one that engulfed a home after the engine caught fire while driving. 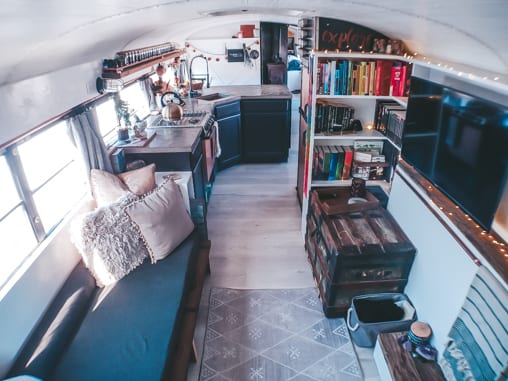 So what can you do to combat these issues when thinking about fire safety in tiny homes?

The number one step is to take pains during your build or renovation to make sure you’ve addressed potential areas of concern to the best of your ability. Thinking about issues before they arise and doing what you can to negate them makes them less likely to actually become a problem.

Beyond that, it’s all about redundancy and layers of protection.

To start with, make a plan. Especially if you have kiddos on board, make sure everyone knows where the exits are and what to do in case of a fire emergency.

Think about the different areas of your little home and what you would do if a fire occurred there. Make sure there are multiple ways to escape in case a fire blocks your main exit. If you don’t have a second exit build one in. Consider your pets, if you leave them home alone while you’re out exploring, and how they might escape.

When creating a fire safety plan, it should include all the potential places and ways a fire could occur and your plan of action for each.

Smoke detectors and carbon monoxide alarms are cheap and easy to install and are one of the best ways to quickly alert you to a problem. You don’t need anything fancy, but a well-placed alarm could mean the difference between you sleeping through a small problem and waking up to a big one or catching a problem early while it’s still manageable.

We have both alarms installed in a central location near our wood stove and water heater. Both have alerted us to little issues here and there, and while nothing has ever been an actual reason for concern, it’s always a nice reminder that in the event an actual problem arises, we will know.

If you know something has a higher likelihood of catching fire, pay attention to it. Do preventative maintenance on appliances and monitor propane lines. Clean out your chimney and replace air filters regularly. Routine maintenance and inspections mean you’ll prevent and catch small issues before they become big problems.

It should go without saying that you should have a fire extinguisher in your home. We actually have several, for multiple purposes.

We’ve written extensively on the AFG Fireball and why it’s our top choice for our skoolie. We appreciate that it’s automatic – if we were off exploring or sound asleep, the Fireball would automatically deploy and stop a fire before it could really start. This was especially important with kiddos and a dog on board. We also appreciate that it’s attractive enough to leave out in plain sight, meaning we can keep one right by our wood stove where a fire is most likely to occur. 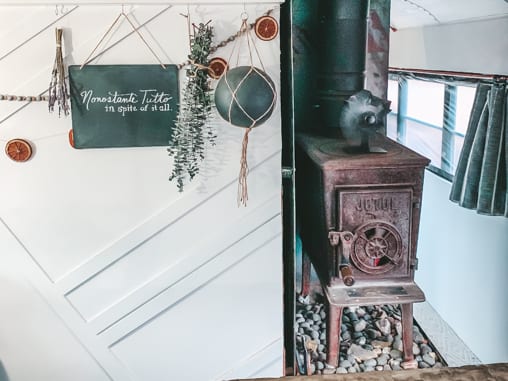 I actually worked extensively with Quora Distribution after finding their product, and they recently helped me put together a package deal specifically for tiny homes on wheels with a code that gives nomads a great discount. You can see the Adventurer’s Packages, inspired by the nomad community, on their website here.

We also have a traditional fire extinguisher. In the event a fire started somewhere unexpected and we were blocked off from the front where we could access a Fireball, we wanted to have a backup system that would allow us to manually push through the flames. We are all about redundancy and layers of protection in this skoolie.

Fire safety in tiny homes is important, but also really easy to accomplish with a little careful planning. And in the case of sometimes as unpredictable and destructive as fire, it’s worth the time it takes to plan and prepare.

Questions about anything I’ve mentioned in this article? As always, write us at info@sincewewokeup.com! 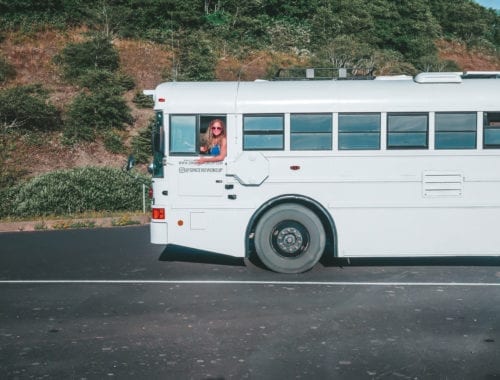 Skoolie Life: Our Most Unflattering Moments 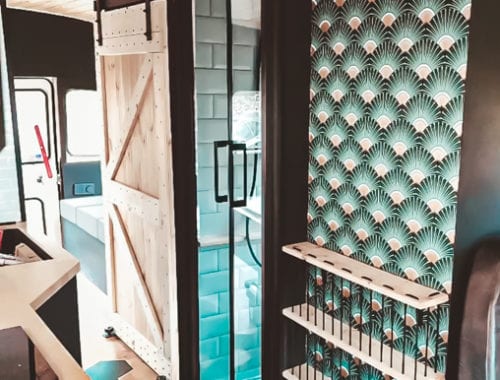 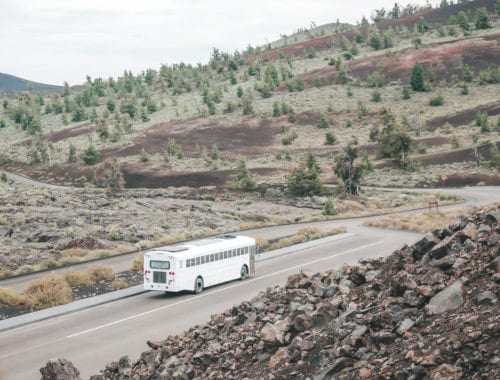